Throughout September, Redbridge conducted a number of quantitative surveys in Sydney and NSW. The most recent reported study (News limited 24th October) was conducted via touch-tone response automated phone survey conducted during the week commencing 13th September 2021. Surveys are conducted between 17:30 – 20:20 weekdays and 10:00 – 17:30 Saturdays at the local time of respondents so as to not over-sample nonworkers and stay-at-homes.

The study was conducted through the federal electorates of Banks, Lindsay and Macquarie (NSW) among a sample of n=1201 people aged 18 years and over from a population of over 464,000 (all ages). Telephone numbers were selected at random from those licensed from a commercial provider and included both landline and mobile phone numbers. In this survey 43.5% of respondents were reached via mobile phone.

Following the completion of the surveys, the data was cell-weighted by gender and age to reflect local population proportions. The weighting efficiency: 0.628 means the effective margin of sample error is +/-1.8%. (based on estimated enrolled voters)

Options were presented to respondents via a randomised sequence. Party names were read out to respondents. “United Australia Party”. Respondents who indicated that they were unsure, were then asked for a ‘lean’ preference.

The federal government has lost most of its 2019 support to the United Australia Party. That said, federal Labor has also lost some ground to minor parties. Overall, 50% of respondents rated the Prime Minister poorly.

These findings indicate a growing minor party presence in critical electorates across the country. However, this growth is not uniform as other Redbridge research has identified a much smaller level of support for minor parties in other parts of the country.

Like all seat-based polls – the usual warnings about using these findings as a predictor of election results. They instead should be used as a barometer of an electorate’s mood at the time of the survey. 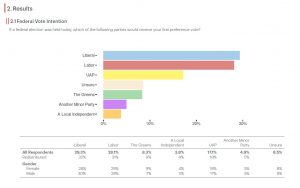 Party options were randomised for each respondent 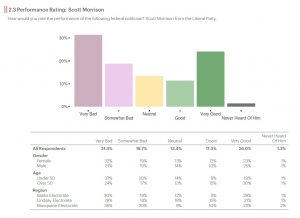